This year I turned 39 and to celebrate we drove to Yosemite National Park with our new 8 month old puppy, Gus. We weren’t sure how Gus would do on such a long drive but he was a trooper.

It wasn’t as difficult finding dog friendly hotels to stay at on last minute notice as we thought it might be. What a relief! 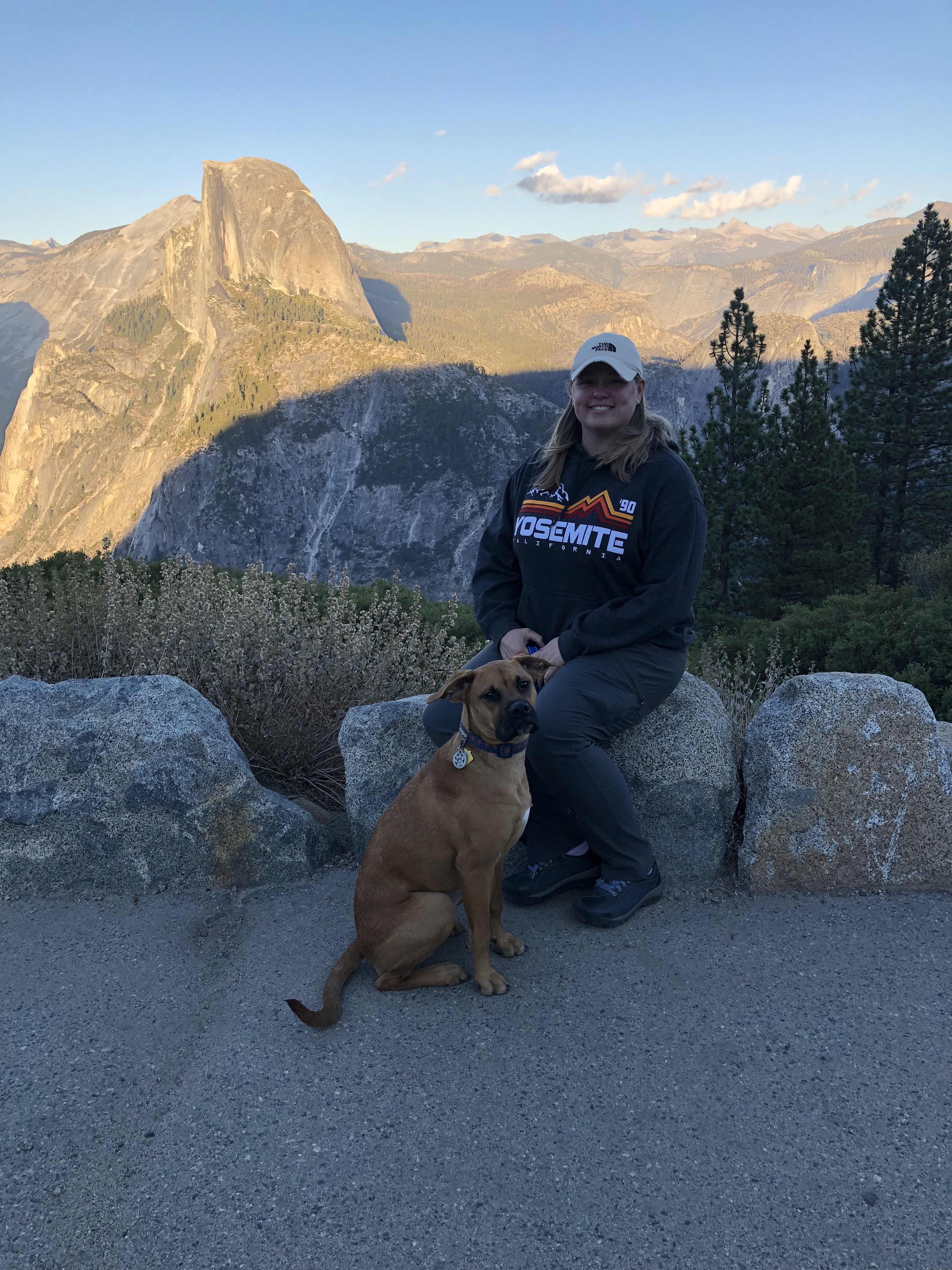 Alex grew up in California so he had visited this park many times. For me this was my first trip. We knew we wouldn’t be able to take Gus on many of the trails but we were able to visit many of the viewpoints with no trouble at all. It was nice in Yosemite in October, the crowds were small and there was lots of parking. The air up in the mountains was very chilly but down in the valley it was warm.

Half Dome was gorgeous at sunset, the sun made the dome change to a bright pink/purple color. As we drove back down the mountain the sky was glowing through the trees.

I was very surprised by the lack of animals in the park. I don’t think we saw anything but squirrels and birds. This was a very big contrast to Yellowstone National Park that we visited back in 2011.

We spent a total of a day and a half inside Yosemite and then we headed off to the city by the bay, San Francisco.

San Francisco is such a fun city to visit. The Wharf is where the tourist action is at so we stopped by for a bite to eat. I love how dog friendly this city is, everyone has a dog here and businesses are good about accommodating them.

We had just enough time in San Francisco to drive down Lombard Street. We got lucky and no cars were in front of us, it’s a fun street to see but I wouldn’t want to live on it. Too many annoying tourists doing this drive all day long would get old fast.

As we made our way out of the city we stopped to view the Golden Gate Bridge. There are many lookout points where you can get a wide angle view of this magnificent structure.

Gus had just about enough of our photo sessions with him and refused to smile. 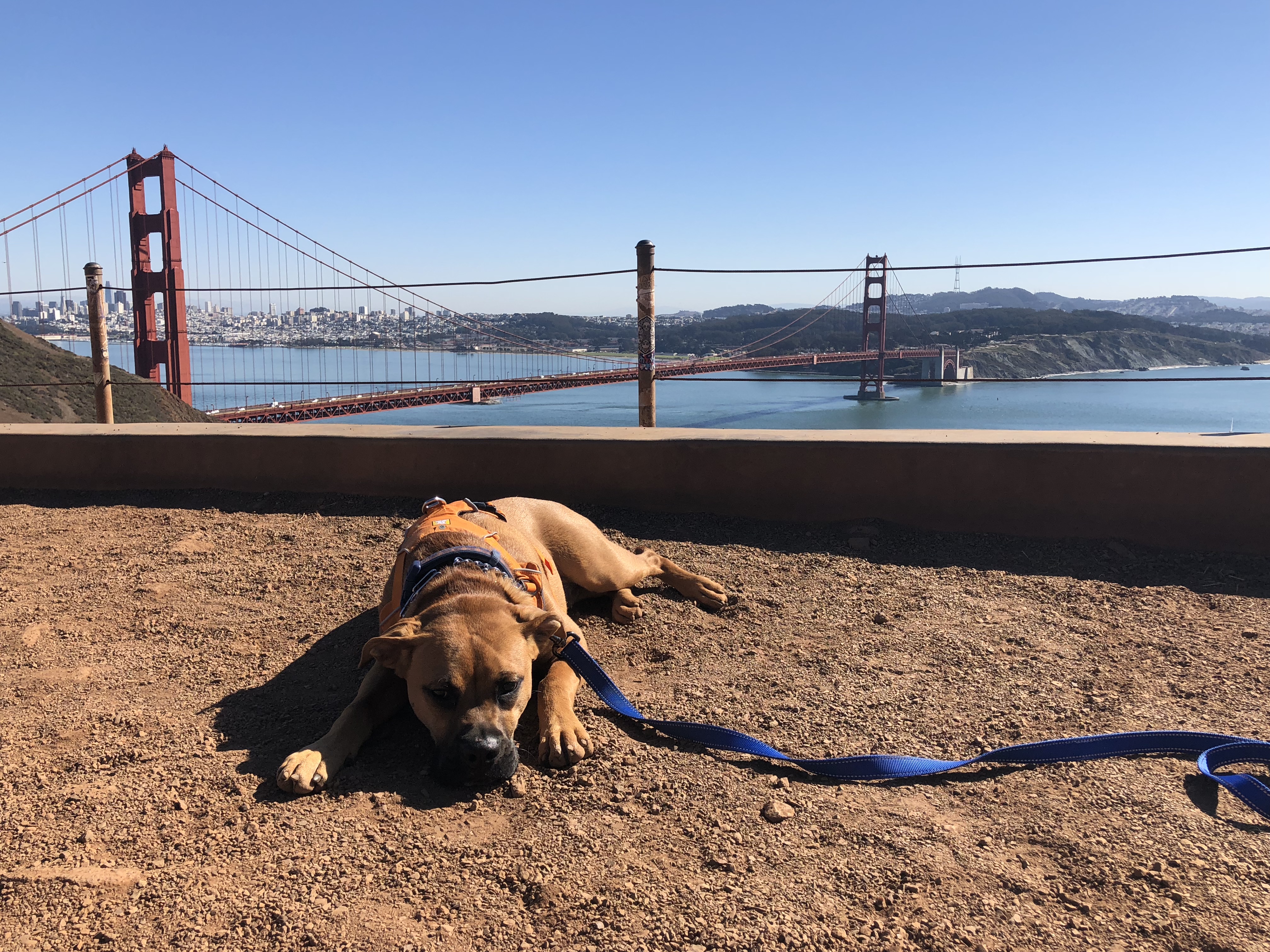 We needed to get a move on so we headed back north up the 101 for a while until we could find a hotel that would take Gus. Once we did we got ourselves a fantastic Mexican feast and hit the hay.

We headed out early the next morning and ran into Paul Bunyan and Babe along the side of the road, unfortunate they didn’t have much to say. 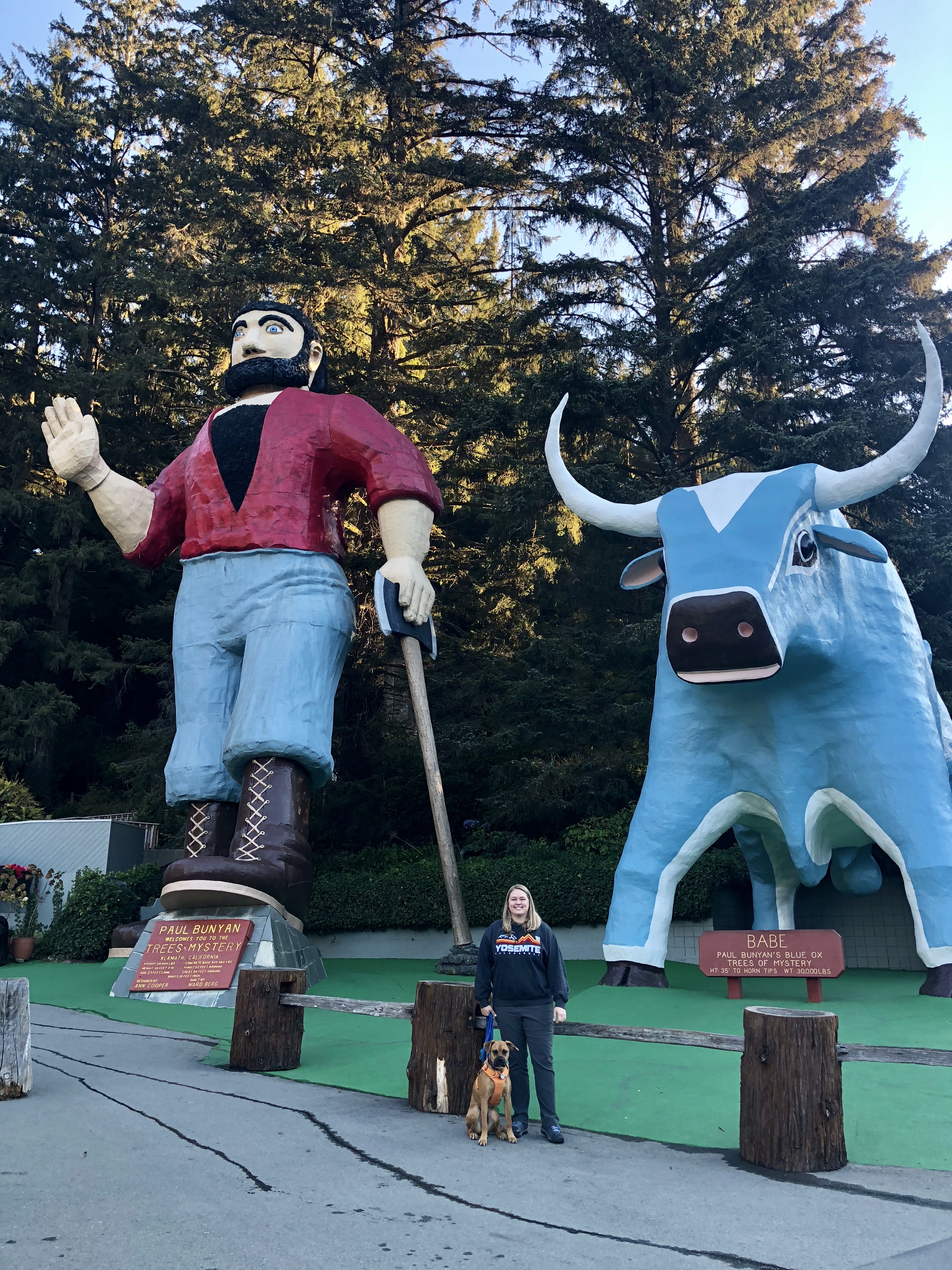 One of my bucket list items was to stop at the Mystery Spot called the Oregon Vortex located in Gold Hill, OR. It’s certainly a tourist trap but I had read about it a long time ago and had always wanted to see it in person. The tour was a hoot! Even if you don’t believe in the paranormal it was still an interesting visit and gave us a good thrill. 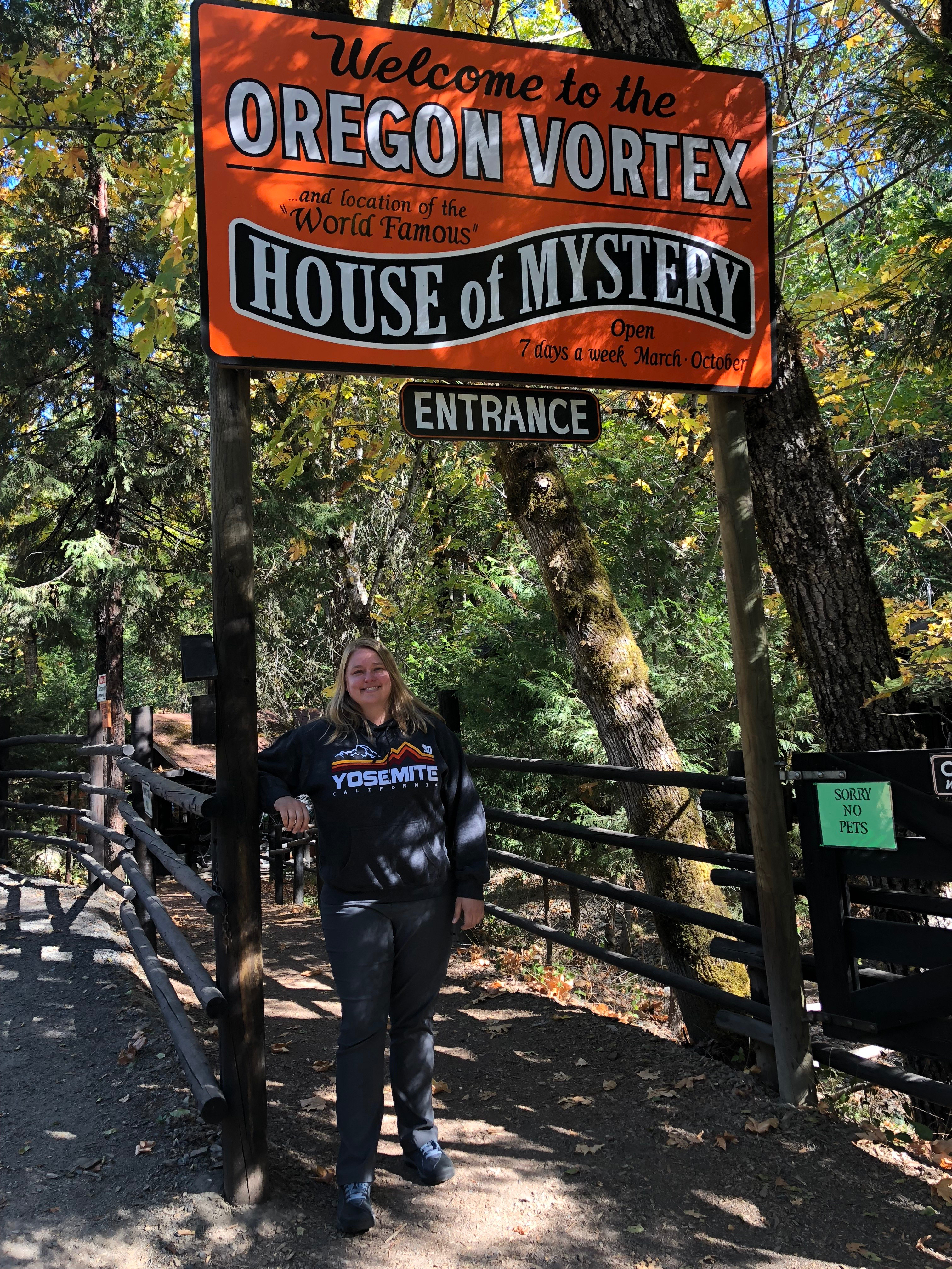 After all of this fun was over we had to head back home. It was a long, long drive but every now and then it’s good to get away and visit a new place. I highly recommend a visit to Yosemite National Park, with your best friend. 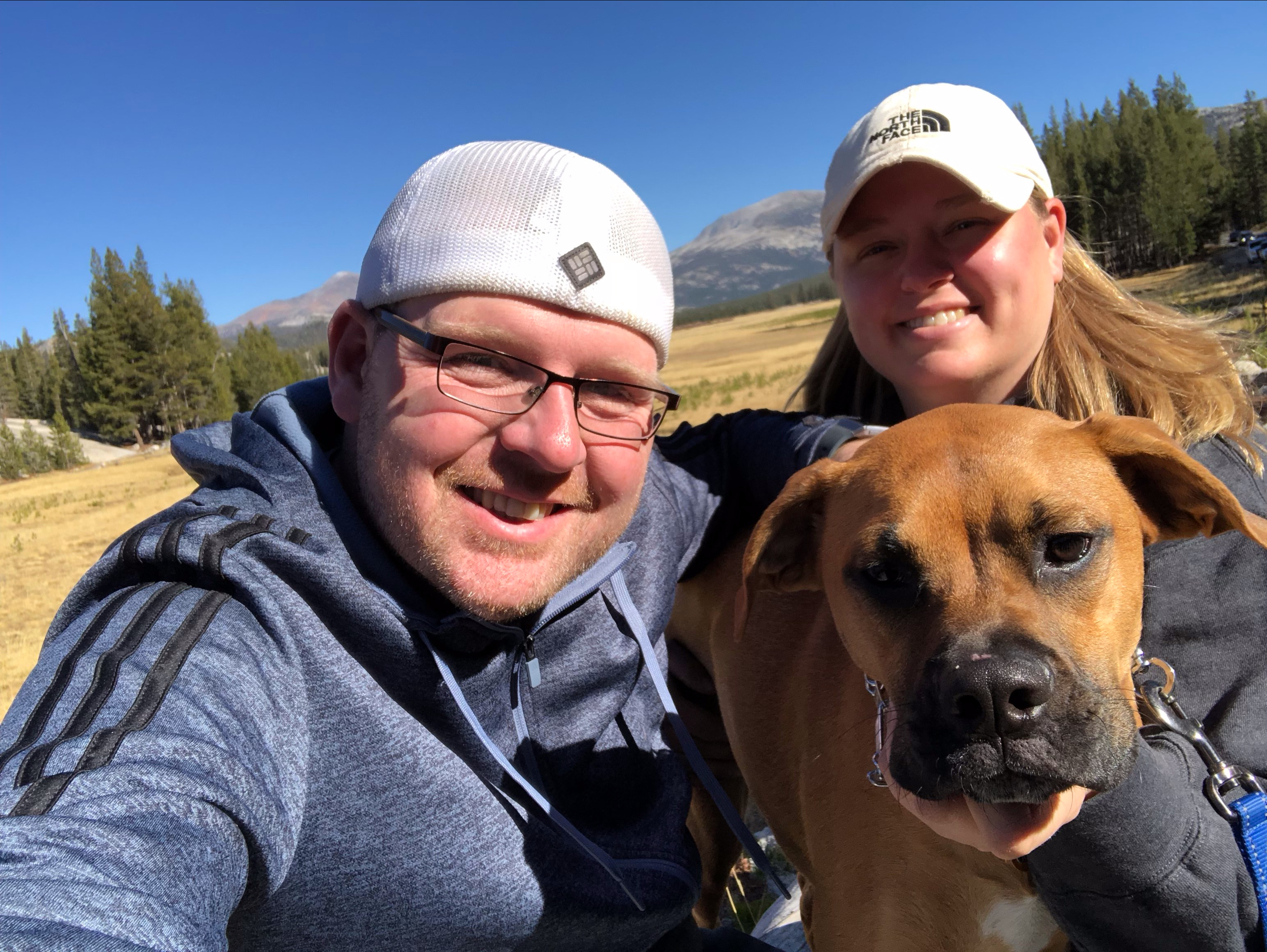