We skipped out early on Portrush and headed toward the Giants Causeway today. We arrived about 9:30 AM and luckily there weren’t many people there at that time.

Here’s what the Wikepedia says about the Giants Causeway:

According to legend, the columns are the remains of a causeway built by a giant. The story goes that the Irish giant Fionn mac Cumhaill (Finn MacCool), from the Fenian Cycle of Gaelic mythology, was challenged to a fight by the Scottish giant Benandonner. Fionn accepted the challenge and built the causeway across the North Channel so that the two giants could meet. In one version of the story, Fionn defeats Benandonner. In another, Fionn hides from Benandonner when he realises that his foe is much bigger than he. Fionn’s wife, Oonagh, disguises Fionn as a baby and tucks him in a cradle. When Benandonner sees the size of the ‘baby’, he reckons that its father, Fionn, must be a giant among giants. He flees back to Scotland in fright, destroying the causeway behind him so that Fionn could not follow. Across the sea, there are identical basalt columns (a part of the same ancient lava flow) at Fingal’s Cave on the Scottish isle of Staffa, and it is possible that the story was influenced by this.

After the Causeway we headed to the Carrick-a-Rede rope bridge.

The bridge is 66 ft long and 98 ft off of the ground. There are crushing waves below, it holds 8 pedestrians at a time. Though there were more than that crossing today when we were on it.

The tiny island on the other side was where fisherman used to launch their boats from to fish salmon. Now it is merely a tourist attraction run by the trust.

Later in the day we arrived in Larne, still in Northern Ireland. There isn’t much to do in the town so we headed out to do a little geocaching. We were able to find one on a nearby trail. 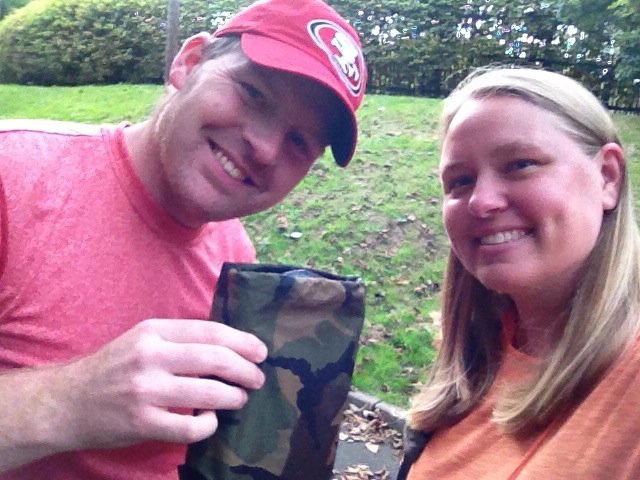 After that we went out to eat dinner at Blue Chicago Grill. This place reminded us of a Red Robin or Ram back home. It was the first bar we’ve found that doesn’t serve Irish beer. We ended up with a bucket of Corona and Peroni.

Tomorrow we head to Kingscourt and get to sleep in a castle. Looking forward to that!!