Today we left Larne and headed toward Kingscourt.

Our first stop was Carrickfergus Castle in Carrickfergus Northern Ireland.
We spent £5 each to enter the castle. We walked around a bit and took some photos. This castle was in great shape and was only missing a wall or two.

Pictured above is King William III and Carrickfergus Castle.

Next we headed down to Kingscourt and found our hotel that was actually a castle from the 1780’s. The original Cabra Castle was ruined in the 1600’s. 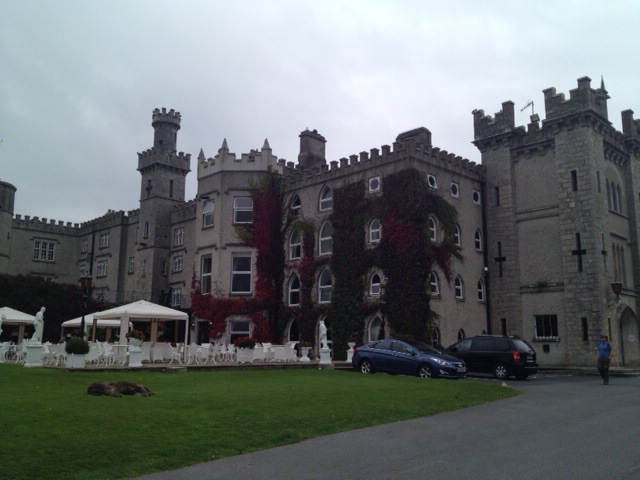 An interesting story about this castle is that it’s haunted by a ghost named Sarah and her unborn child.

Here’s what I’ve found online about the haunting.

In The 1780’s, the local people of Dun Na Rí witnessed the unfolding of the tragic saga which was to become the legend of the ghost which still haunts Cabra Castle to this present day – dare to walk the corridors of this haunted castle knowing that the footsteps that went before you were that of evil predecessors………The then owners of the castle had a daughter and two sons, one of whom fell in love with a servant girl called Sarah. In true Romeo & Juliet – style, it was a passionate but secret love, which for the sake of property, could only be pledged silently.
The secret was broken when Sarah became pregnant and her lovers family ordered that she was to be killed; legend has it that she was taken from the Servants Quarters of the castle and dragged deep into the forest, where her body was hung over a bridge.It is said that in the dead of the night, the haunting cries of a baby may still be heard in Cabra Castle. Local people say that the baby is pining for its mother.
There is also a testament by those who have felt ‘a presence’ in the courtyard rooms – formerly the Servant’s Quarters where it is said that Sarah’s lost soul still wanders the Castle in search of her lost love and her lost child……..

I’ve also read some things about people feeling a presence and hearing the baby crying. I know it’s a hard thing to believe in this stuff and Alex is definitely not a believer but I am going to be sleeping with the lights on tonight. Especially since our room is in the courtyard not far from where Sarah lived. My mind will certainly play tricks on me tonight. I’m already spooking myself.